Dashing Through the Snow, But Not Laughing All the Way — GasBuddy Reveals the Cities With the “Scroogiest” Drivers During the 2020 Holiday Season 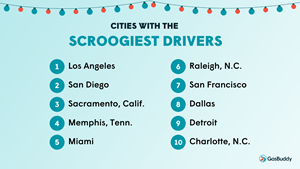 Boston, MA, Dec. 17, 2020 (GLOBE NEWSWIRE) — Road rage tends to creep up during the holidays given the heightened stress and anxiety the season ignites. This year being truly “a year to remember,” GasBuddy, the travel and navigation app used by more North American drivers to save money on gas, reveals which U.S cities are expressing that stress in the form of aggressive driving. This study examined millions of GasBuddy Drives data during the Thanksgiving holiday weekend defined as Nov 25 – Nov 29, 2020, and looked at which cities had the highest frequency of aggressive driving habits like rapid acceleration, hard braking and speeding. The Top 10 Cities With the Most Aggressive Holiday Drivers: Los Angeles, San Diego Sacramento, Calif. Memphis, Tenn. Miami-Fort LauderdaleRaleigh, N.C. San Francisco Dallas-Fort Worth Detroit Charlotte, N.C.Half of the cities listed in the Top 10 list are making their second “scroogy” appearance, having also been included in last year’s study. Los Angeles and San Diego each jumped five spots respectively, to now hold the titles as the cities with the “scroogiest” drivers. The complete city rankings can be found here.“California issuing another round of stay-at-home orders immediately ahead of Thanksgiving on Nov. 19 could have been the catalyst for the highest percent of Grinch-style aggressive driving occurring in the country,” said Patrick DeHaan, head of petroleum analysis at GasBuddy. “When we are anxious and stressed, it surfaces in a multitude of ways including how we drive. Given how this year is going, it’s likely we’ll also see a higher level of aggressive driving ahead of Christmas. ” GasBuddy recommends drivers stay calm on the road to stay safe and save money on their fuel costs. Motorists can opt-in to GasBuddy’s new Drives feature in the GasBuddy app to evaluate how ‘scroogy’ (and fuel-wasteful) they are on the road. The feature gives drivers a fuel efficiency grade of POOR, GOOD or GREAT based on how often aggressive driving/fuel-wasting habits are committed, allowing drivers to better understand their driving habits and make necessary adjustments.
MethodologyThe findings were compiled using data from GasBuddy’s opt-in Drives Feature in the GasBuddy app that offers drivers an assessment of their driving habits during their trip in an effort to improve fuel efficiency. GasBuddy examined Drives data in the top 50 metropolitan areas by population as defined by the United States Census Bureau from Nov 25 – Nov 29, 2020, noting the collective percentage of POOR, GOOD, and GREAT trips per city. Each driver’s trip receives a grade of POOR, GOOD, and GREAT, which is defined by the number of aggressive driving incidents that occur: hard braking, quick acceleration and speeding.
About GasBuddyFor budget-minded drivers, GasBuddy is the travel and navigation app that is used by more North American drivers to save money on gas than any other. Unlike fuel retailer apps, as well as newer apps focused on fuel savings, GasBuddy covers 150,000+ gas stations in North America, giving drivers 27 ways to save on fuel. That’s why GasBuddy has been downloaded nearly 90mm times – more than any other travel and navigation app focused on gas savings. GasBuddy’s publishing and software businesses enable the world’s leading fuel, convenience, QSR and CPG companies to shorten the distance between the North American fueling public and their brands. For more information, visit https://www.gasbuddy.com.AttachmentsGasBuddy Scroogiest Drivers 2020REPORT_ Cities With the Most Aggressive Holiday Drivers 2020 – GasBuddyPatrick De Haan
GasBuddy
7736441427
press@gasbuddy.com