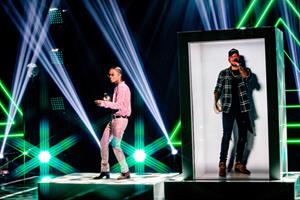 Los Angeles, CA, Sept. 25, 2020 (GLOBE NEWSWIRE) — Kane Brown appears via hologram at the 10th Anniversary of the iHeartRadio Music Festival, which airs this weekend on The CW Network September 27 and 28 at (8:00-10:00pm ET) Brown was beamed in from Nashville via the Epic PORTL Hologram machine to sing with Swae Lee and Khalid. It’s the first use of the Epic PORTL Hologram machine on a national television special or by a major artist, and this kicks off what will be an instant solution to any travel problems affecting artists during the pandemic and beyond.When there were travel-related complications in getting Kane Brown, Swae Lee and Khalid on the same stage for the festival, the producer, the Joe Lewis Company, came up with the solution to beam him in by hologram with PORTL.The Epic PORTL Hologram machine is the first, and only compact hologram device that lets people beam themselves in from anywhere in the world to appear in 3D, lifesize, and interact in real time. The device is available to order now and can be used in schools, museums, sports venues, airports, corporate offices and even the home. Its slogan is “If you can’t be there, beam there!”PORTL’s inventor, David Nussbaum, has worked beaming people to and from Nashville before with earlier hologram technology. He has sent Jimmy Kimmel to Nashville three years in a row and beamed Florida Georgia Line, The Band Perry and Kacey Musgraves back to Kimmel’s stage in Hollywood. He produced a segment in which Hunter Hayes performed with multiple holograms of himself for Jimmy Kimmel Live.  Nussbaum has also been involved in arena-sized hologram show tributes to latin music stars Juan Gabriel and Jenni Rivera.“I’ve been beaming people all over the world,” said PORTL Inventor and CEO David Nussbaum. “But Kane Brown really showed the potential for a dynamic artist to deliver his music with full intensity in the PORTL machine. Swae Lee and Khalid were amazing too. iHeartRadio and the Joe Lewis Company can be proud of being the first to introduce PORTL to a huge audience.”The Festival also featured unforgettable performances from Alicia Keys, Bon Jovi, BTS, Coldplay, Keith Urban, Migos, Miley Cyrus, Thomas Rhett with surprise guest Jon Pardi, Usher and more. Hosted by Ryan Seacrest, the iconic weekend-long virtual festival that was recorded on stages in Los Angeles and Nashville, streamed on The CW App and CWTV.com, and broadcasted on iHeartMedia stations nationwide Sept. 18 and 19. The CW Network will broadcast the two-night televised iHeartRadio Music Festival on Sunday, September 27 (8:00-10:00pm ET) and Monday, September 28 (8:00-10:00pm ET).For more information about PORTL Hologram: PORTLhologram.comFor moer information about Joe Lewis Company: Joelewiscompany.comFor more information about iHeartRadio: iheart.com     AttachmentWesAndAlex_iHeartRadioMusicFestival2020_WA1_1594Portl Hologram
owen@thoughtgangmedia.com