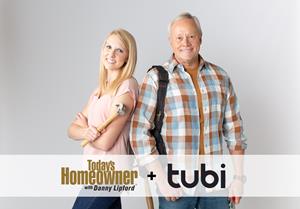 Mobile, AL, Sept. 23, 2020 (GLOBE NEWSWIRE) — Danny Lipford’s Emmy-nominated, nationally syndicated television show, “Today’s Homeowner,” which is entering its 23rd consecutive broadcast season, has expanded its streaming footprint with a new partner, Tubi. Consumers are craving quality home improvement content, and that’s exactly what Tubi viewers will find with the addition of “Today’s Homeowner” to the platform.This new OTT partnership capitalizes on two huge growth areas fueled by the Covid-19 pandemic – interest in home improvement and streaming content. Major home improvement retailers like The Home Depot report more than a 25% increase in profits for Q2. And, according to Nielsen’s August 2020 Total Audience Report, video streaming increased from 19% in fourth-quarter 2019 to 25% in second-quarter 2020.“The interest in home improvement is at an all-time high,” said Danny Lipford, host of “Today’s Homeowner” TV. “We’ve seen spikes in our web traffic, social engagement and a steady increase in emails from our TV and radio audience. Homeowners are engaging with our brand more than ever, and we’re thrilled they’ll be able to view our content on Tubi and take away practical, trustworthy information they can use in their own homes immediately.”With its debut on Tubi, past seasons of “Today’s Homeowner” TV will be available to an additional 33 million monthly active users.Tubi is the leading free, premium, on-demand video (AVOD) streaming app available in the U.S., Canada, Australia and New Zealand. It offers the largest library of content with over 23,000 movies and television shows available to its audience and can be accessed on over 25 devices – the most of any AVOD service. In addition, the app offers a personalization engine that recommends the best content for users. “Today’s Homeowner” content will be offered in the platform’s “Lifestyle” category.Tubi viewers tuning in to “Today’s Homeowner” will have access to episodes from the most recent seasons of the show – 19, 20 and 21. All seasons, containing over 500 episodes of fresh, trusted, practical advice to help maintain and improve their homes, will be available on Tubi by the end of October. The half-hour home improvement show follows father-daughter host team Danny Lipford and Chelsea Lipford Wolf, as they work with real homeowners to tackle projects and share the successes and lessons learned along the way. Weekly featured segments include “Simple Solutions,” which offers clever tips and hacks to solve common problems in the home, and “Best New Products,” which shows off the latest-and-greatest home improvement tools and gadgets.Working as the exclusive father-daughter host team for syndicated home improvement TV in the U.S., Lipford and Wolf have a natural energy and on-camera camaraderie viewers love. Their lighthearted humor and practical joking keep the audience entertained as they inspire and empower audience members. With Lipford’s 40+ year remodeling career, combined with Wolf’s eye for upcycling and creative design, Tubi viewers will leave each episode with information they can immediately put to use in their own homes.About Today’s Homeowner MediaToday’s Homeowner is a trusted home improvement authority delivering fresh, original, practical advice to consumers across diverse media platforms including the top-rated, nationally syndicated “Today’s Homeowner” television show, now in its 22nd season, and its radio counterpart, the nationally syndicated “Today’s Homeowner” radio show. Additionally, the media brand hosts the top home enthusiast destination website, TodaysHomeowner.com, the weekly “Today’s Homeowner” Podcast, robust social media channels and the award-winning lifestyle blog and web series, ”Checking In With Chelsea.” 3 Echoes Productions, the professional production arm of the brand, serves an impressive national clientele with expert video services.Host and founder of the brand, Danny Lipford, is among the most respected and sought-after home improvement experts in the country. With over 200 national television appearances, Lipford travels the country as a brand ambassador and spokesperson and contributes his trusted expertise to popular broadcast, print and digital media outlets each year.About TubiHeadquartered in San Francisco, Tubi (www.tubi.tv), a division of FOX Entertainment, is an ad-supported video on demand (AVOD) service with movies and television shows from nearly every major Hollywood studio. Tubi gives fans of films and television programs an easy way to discover new content that is available completely free.The service is currently available in the US, Canada, Australia, and Mexico. Tubi is available on Android and iOS mobile devices, Amazon Echo Show, Google Nest Hub Max, Comcast Xfinity X1, Cox Contour, and on OTT devices such as Amazon Fire TV, Vizio TVs, Sony TVs, Samsung TVs, Roku, Apple TV, Chromecast, Android TV, Xbox One, and PlayStation 4, and soon on Hisense TVs globally. Consumers can also watch Tubi content on the web at http://www.tubi.tv/.AttachmentTH and TUBIStephanie Greenwood
Today’s Homeowner Media
2514783345 x110
stephanie@todayshomeowner.com