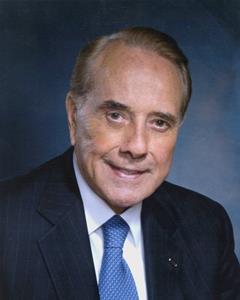 Chicago, Sept. 09, 2020 (GLOBE NEWSWIRE) — World War II veteran and Senator, Bob Dole, is announced as the inaugural recipient of the Pritzker Military Museum & Library’s Citizen Soldier Award, to be awarded during the 2020 Liberty Gala on October 21st, 6pm CT. “As the preeminent Institution dedicated to the preservation and exposition of the ideals of the Citizen Soldier, as well as the role of the Citizen Soldier in the preservation of democracy, we wanted to honor an individual who exemplifies those characteristics,” stated Pritzker Military Museum & Library President & CEO, Dr. Rob Havers. “The Citizen Soldier Award is a way to both recognize the service of an individual and highlight the qualities – duty, honor, sacrifice, service before self, courage, patriotism – that this honoree brings to life. Senator Bob Dole is the epitome of the Citizen Soldier tradition.”The Citizen Soldier Award honors a person who is the embodiment of the Citizen Soldier tradition set by George Washington. Since America’s beginning, the nation has trusted its citizen soldiers, not only to defend the nation when called upon, but as in the case of General Washington, to serve the nation as leaders in war and in peace. The award honors a man or woman who exemplifies sacrifice and service, serving in both war and peace for the betterment of the common good. Senator Bob Dole personifies the ideal set forth by George Washington that is carried on by the military today.“I am certainly humbled to receive the Pritzker Military Museum & Library’s Citizen Soldier Award,” stated Senator Bob Dole. “To me, being a citizen soldier really comes down to the path one chooses to follow in life.  It has always remained a priority for me to serve others – both in the military and beyond.  In my 97 years, I hope I have helped some people along the way and made a small impact on our larger world.  I have great hope for future generations of Americans who are following in the footsteps of so many other citizen soldiers throughout our great nation. Thank you for this tremendous honor.”Born in Kansas in 1923, Dole’s younger years were influenced by the Great Depression and the themes of sacrifice and hard work. His college career at the University of Kansas was interrupted by the outbreak of WWII, and he was sent to Italy in 1944 as a combat infantry officer with the U.S. Army Enlisted Reserve Corps. When Dole’s “I” Company of the 85th Regiment was met by intense machine gun fire, he was critically wounded and paralyzed from the neck down. For his service in the military, Dole was awarded two Purple Hearts and a Bronze Star. After extensive rehabilitation, he took advantage of the GI Bill to continue his education. Entering the political arena in the 1950s, he served in the Kansas state legislature before joining Congress in the House of Representatives and then as a Senator. He still holds the record for longest-serving Republican leader. After leaving political life, he continues to hold true to his values of sacrifice and hard work, advocating for the disadvantaged and disabled. A voice for veterans, he continues to meet and serve those around him to this day.“We can think of no other person who most symbolizes the values and traits of the citizen soldier than our inaugural awardee, Senator Bob Dole,” stated Pritzker Military Museum & Library Founder, Colonel (IL) Jennifer N. Pritzker, IL ARNG (Retired). “As a man who continues to dedicate his life to the greater good in both war and peace, who has put aside self interest and state lines to serve the common goal, Senator Bob Dole is a worthy recipient of this award.”The 2020 Liberty Gala, to be held virtually on October 21st, will celebrate the work of the Pritzker Military Museum & Library, and honor the service and stories of the U.S. Armed Forces’ citizen soldiers, past and present.To learn more about the Museum & Library, visit pritzkermilitary.org.ABOUT THE PRITZKER MILITARY MUSEUM & LIBRARYThe Pritzker Military Museum & Library is open to the public and features an extensive collection of books, artifacts, and rotating exhibits covering many eras and branches of the military. From its founding in 2003, it is a center where citizens and soldiers come together to learn about military history and the role of the military in a democracy. The Museum & Library is a non-partisan, non-government information center supported by its members and sponsors. #            #            # AttachmentBob_Dole,_PCCWW_photo_portraitSarah Schwartz
Pritzker Military Museum & Library
3123749333
SSchwartz@pritzkermilitary.org