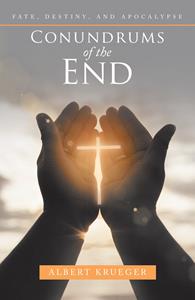 PHOENIX, Sept. 01, 2020 (GLOBE NEWSWIRE) — In this year alone, our world is facing a global pandemic and the political climate is arguably more divisive than ever before. All of this chaos can beg the question: Is this the end of life here on planet Earth? In his recently published book, “Conundrums of the End: Fate, Destiny, and Apocalypse,” Albert Krueger argues that we are living at the end of Western civilization.Krueger grew up with a very scientific, analytic mindset, but found his faith at the University of Arizona after working with various faculty in the philosophy department. This sparked his passion for religion and he eventually found his place in the Episcopal Church. Within his own church, he has seen a critical transition from the conventional to a more progressive worldview. Krueger points out, in “Conundrums of the End,” how there has been a mass change in our society as a whole.“The swiftly changing role of the institutional church in society is a key sign in the changes affecting Western civilization,” said Krueger.After listening to a presentation in the Episcopal Church in 1981, Krueger began to think about our world and if we indeed were living in apocalyptic times. Krueger then began his research for his book, “Conundrums of the End,” where he provides biblical teachings to support that the fundamental assumptions of Western Civilization are losing their common appeal. This book not only looks at the modern apocalyptic times we are living in but also prepares readers for the change.“I want to help people prepare to transition from the world that is ending into the world that is coming,” said Krueger. “The postmodern world is already happening.”“Conundrums of the End: Fate, Destiny, and Apocalypse” By Albert Krueger   ISBN: 978-1-9736-9232-4 (softcover); 978-1-9736-9233-1 (hardcover); 978-1-9736-9231-7 (e-book)Available at the WestBow Press Online Bookstore, Amazon and Barnes & Noble.About the author Albert Krueger, along with his family, converted to the Episcopal Church right before he went to college and he was inspired to become an ordained minister after he left college. Krueger was ordained to the Diaconate in San Francisco in 1980 and ordained to the priesthood in Walla Walla, Washington in 1981. Kruger earned a bachelor’s degree in philosophy from the University of Arizona and a Master of Divinity degree from the Church Divinity School of the Pacific. Now, he is retired from active ministry and resides in Phoenix, Arizona with his wife, Diana. To connect with the author and learn more about “Conundrums of the End,” please visit Kruger’s author website: www.conundrumsoftheend.com.About WestBow PressWestBow Press is a strategic supported self-publishing alliance between HarperCollins Christian Publishing and Author Solutions, LLC — the world leader in supported self-publishing. Titles published through WestBow Press are evaluated for sales potential and considered for publication through Thomas Nelson and Zondervan.  For more information, visit www.westbowpress.com or call (866)-928-1240.AttachmentConundrums of the End – Albert KruegerLAVIDGE Publicity
LAVIDGE Publicity
480-648-7560
ktillman@lavidge.com