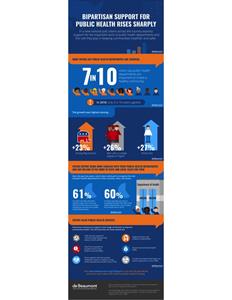 Bethesda, MD, Sept. 01, 2020 (GLOBE NEWSWIRE) — As the nation transitions out of convention season, public health is an issue where voters find common ground.Awareness and recognition of the role local health departments play has risen significantly since the last election season, according to a new national poll, suggesting that public health will be a key issue for voters this year. In the poll, conducted July 7-13, 73 percent of voters said public health departments play an important role in keeping people healthy, up from 56 percent in 2018. And after hearing a list of the types of services health departments provide, 6 in 10 voters said they’d be willing to pay more in state and local taxes to increase funding for local health departments.The national poll was conducted by Public Opinion Strategies for the de Beaumont Foundation, following up on a similar poll before the 2018 elections. The increased recognition for public health departments cuts across age, gender, race, political party, education, and income. Among people who said public health is important or very important (rating 8-10 on a 1-10 scale of importance), some of the biggest increases were among:White men (+27%)Men with a college degree or higher (+26%)Republican men (+25%)Strong Republicans (+23%)Independent women (+22%)Voters living in the Midwest region (+21%)Among all voters, 60 percent said they were somewhat or very familiar with their local health department (40% not too or not at all familiar), a net shift of 22 points from 2018 (49% very or somewhat familiar; 51% not too or not at all familiar). “If there was ever a year for candidates to show their support for local health departments, it’s 2020,” said Brian C. Castrucci, DrPH, president and chief executive officer of the de Beaumont Foundation. “With this high level of support among all voters, community leaders have an unprecedented opportunity to make the case for more funding and support for public health. And voters should be asking candidates about their plans to keep communities healthy and safe.”Elizabeth Harrington, the principal researcher and a partner at Public Opinion Strategies, said, “The increased importance of public health departments is significant, but not surprising given the COVID-19 pandemic. However, the increase among Republicans, white voters, and males was particularly striking. On many issues, you see support clearly divided between Democrats and Republicans, but today voters in both parties recognize the importance public health departments have in creating healthy communities.”Not surprisingly because of the timing of the poll, voters indicated a higher level of support for public health preparedness and response. Among all services, voters most valued the following services (rated 8-10)Helping to stop the spread of communicable diseasesSupporting women’s and children’s healthReaching out to people that are at greatest risk of poor health outcomesEnsuring environmental health, such as clean air and waterWorking together with the broader healthcare system to address problems before they become health crisesProviding critical, unbiased information on how to respond/what to do in a crisis to protect yourself and those close to youPoll methodology: Public Opinion Strategies conducted a national telephone survey among N=800 registered voters July 7-13, 2020. The survey has a margin of error of +/-3.46%. See the detailed findings at debeaumont.org/2020poll. Attachmentpublic health poll infographicMark Miller
de Beaumont Foundation
301-802-6783
miller@debeaumont.org